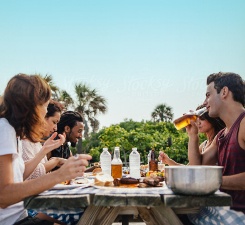 Quinovic Merivale has a large number of properties that we offer on a room by room basis. Gone are the days of the stereotypical boarding house- a term which conjures up negative images. The majority of our rooms are in well designed, purpose built, high quality houses.

So, who is living in this sort of accommodation? – Primarily foreigners from a mix of countries who are here on working holiday visa’s.

Why Room by room properties? – Expenses are generally included in the rent, making things very simple, They get to mix with all sorts of different nationalities; they are not responsible for other people paying rent and they do have different notice periods than a standard tenancy giving them more flexibility.

However, sharing accommodation doesn’t come without its issues; Around 75% of sharers simply want a housemate who is clean and tidy, according to realestate.com.au’s latest Consumer Intentions Study.Doing their fair share of chores and being compatible personality-wise were also high on the list of important housemate qualities. Having similar interests isn’t a top priority with just 36% citing it as important, nor is being social outside the household which mattered to just 23% of the people who responded to the recent survey.

In terms of age groups, 34% would prefer living with housemates aged between 25 and 44-years-old, while one in two wouldn’t consider sharing at all.

With increased housing costs holding people back from buying their own home, living with housemates has shifted away from being predominantly a short stint a lot of people do, mostly while they’re young. Students and travelers are now in the minority, according to a recent analysis from flatmates.com.au. of shared living in 2017.

As housing becomes less affordable, people are being forced to do things later in life. People are moving out of the family home later, staying in shared homes longer and, if they’re exceptionally lucky, purchasing their own place at a much older age than their parents.
With aspirations of home ownership so out of reach, it’s not surprising that those in their 20s are house sharing for longer.

This means that the type of people seeking shared accommodation is more varied and diverse than ever.

Despite the mix of people house sharing being much more eclectic these days, there are still plenty of unwashed dishes piled up in sinks all across New Zealand thanks to lazy housemates.

So let’s get to the nitty-gritty – what are our top pet peeves about house sharing? What do we hate about our housemates?

Given that being clean and tidy is what most want in a housemate, falling short on this is a major no-no.
Indeed, 65% of renters/sharers cited a lack of cleanliness and tidiness as their top bugbear.

Next on the list of annoyances is not paying bills and rent on time. Not pulling your weight when it comes to housework won’t go down well either, over half of renters and sharers surveyed found this irritating.

Smoking certainly isn’t going to leave you spoilt for choice when it comes to cherry picking housemates, 43% of people in the survey cited smoking as an issue.

Happily, having a furry friend in tow won’t get in the way of shared living nirvana, only 14% of those surveyed stated pet issues as a problem.

You should never pick a flatmate based on any hopes of romantic engagement or based on physical attractions.
Take the time to look into who you’d be comfortable sharing with – background checks are also a smart idea as you want to know ultimately, who you’ll be sharing your home with.

Otherwise, you may risk ending up with the housemate from hell